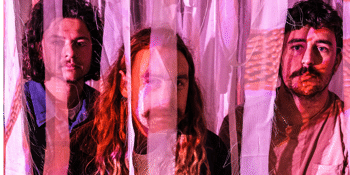 The Grogans ‘Inside My Mind’ Tour

With special guests
The Northern (Byron Bay, NSW)
Saturday, 16 July 2022 8:00 pm
18 days away
18 Plus
Punk
Rockabilly
Reggae
Send this event to
Genre-expanding outfit The Grogans are a trio of best mates from Melbourne who’ve been craftily avoiding pigeon-holes and singular definitions of their sound since first banding together in 2016. Comprised of long-term friends Quin Grunden, Angus Vasic and Jordan Lewis, The Grogans explore nuanced manoeuvres in surf, punk, blues, garage, psych, rockabilly and reggae whilst maintaining a quintessential sonic integrity across their dynamic catalogue. Through their exponential malleability, The Grogans have quickly earned their stripes as one of Australia’s most intriguing acts of recent times.

The band will be hitting the road again through June-August 2022, heading around AUS as well as their first international dates in NZ following their next single ‘Inside My Mind’ (released on May 4th). This is the third single the band have released, since their 2020 album ‘Day / To /Day’. Unlike focusing on the bands garage / punk roots as we heard in ‘Just A Kid’ & ‘Be Your Man’, ‘Inside My Mind’ veers down a new – psychedelic / soulful – avenue to what we have come to expect from this next album. This track is to the likes of tracks ‘Unnecessary’, ‘Nobodys’ & ‘Conflicting’.